Whincup into Hall of Fame in retirement - Australian motorsport legend Jamie Whincup has narrowly missed the podium in his final Bathurst 1000 as a full-time driver.
Perfect 10! Patel spins into rare club - New Zealand great Richard Hadlee has recognised the extraordinary feat of spinner Ajaz Patel, who can't believe how "the stars have aligned" ...
NSW Omicron cases increase to 15 - Two more cases of the Omicron variant have been detected in NSW, bringing the state's total to 15.
Mostert ready for Bathurst 1000 from pole - He has won the Bathurst 1000 from last, now Chaz Mostert will start the Great Race at the front of the grid.
New COVID cases emerge as QLD shuts out Greater Adelaide -    Contact tracing is underway after seven new cases of coronavirus were detected in Queensland overnight. Health Minister Yvette D'Ath says of the ...
Regions bucking property bust for now - While the brakes are on Australia's runaway property boom, the jury is out on whether the thus-far dramatic shift will affect everyone equally.
WHO scientist urges against Omicron panic - The World Health Organisation's chief scientist has urged people not to panic over the emergence of the Omicron coronavirus variant and says it is too ...
Old Fernvale Bakery owner pleads for customers to return -   A Fernvale bakery owner has seen transactions plummet and is pleading with customers to return after a casual contact of a covid positive person vi ...
$11m state-of-the-art animal genomic centre to be built in Ipswich - Australia’s most advanced animal genomics facility will be built in Ipswich with a former University of Queensland site at Bundamba transformed into ...
Interstate incursion likely cause of Gold Coast COVID-19 case - Queensland has recorded zero community covid cases but six cases in quarantine. Four were in hotel quarantine, two in home quarantine. Friday 3 ... 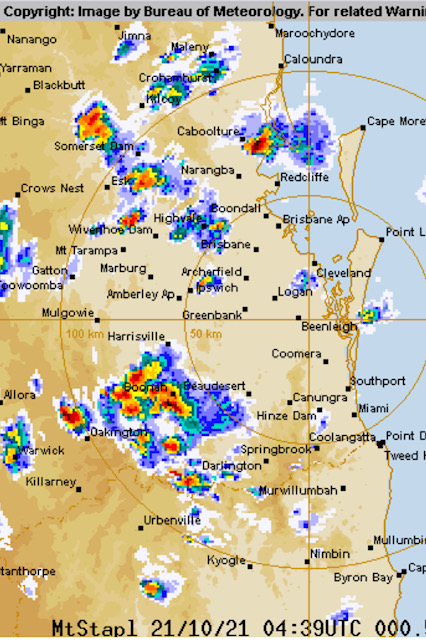 Intense rain, wild winds and huge hailstones are expected to hit parts of south-east Queensland and the Darling Downs this afternoon.

BOM has issued a severe thunderstorm warning for Brisbane, Moreton Bay, Gold Coast, Ipswich and the Sunshine Coast, as storm systems develop in the north west and south east of the state.

The latest warning states: “Severe thunderstorms are likely to produce damaging winds, large hailstones and heavy rainfall that may lead to flash flooding over the next several hours in the Southeast Coast and parts of the Darling Downs and Granite Belt districts.” Locations which may be affected include Gold Coast, Brisbane, Maroochydore, Ipswich, Laidley, Lowood and Toowoomba. The slow-moving storms are forecast to affect Beenleigh, Deception Bay waters and Bribie Island by around 3pm.

People in those areas are being told to move their car under cover, secure outdoor items, avoid flood waters, stay indoors, avoid using the phone during a thunderstorm and be careful around fallen trees and powerlines.