Lobbyists barred from work with Qld govt - Three Queensland lobbyists will be barred from contacting cabinet ministers as Premier Annastacia Palaszczuk seeks to make her government "the mo ...
Landlords bracing for influx of tenant pet requests under new laws - Landlords are bracing themselves for an influx of tenants seeking approval for pets. From October 1, new rental laws around pets and terminating te ...
Two men critical, Cunningham Hwy closed, after two-vehicle smash - Two men are in critical condition after a two-vehicle crash on the Cunningham Highway, south of Ipswich. Emergency services remain on the scene wit ...
Denmark in shock as gunman kills three - Three people have been killed and several more wounded in a shooting at a shopping centre in Copenhagen, Danish police say, adding they have arrested ...
Furore over Pisasale name change report as councillor calls for investigation - The fallout from the decision to keep disgraced former mayor Paul Pisasale’s name on an Ipswich bridge and street continues with questions now being ...
PM pledges more Ukraine aid during visit - Prime Minister Anthony Albanese has promised an extra $100 million in military aid to Ukraine, and labelled Russia's bombing of Kyiv as a war crime.
Two men allegedly steal ute for wild ride across Toowoomba - Two men have allegedly taken a stolen ute for a dangerous joyride across Toowoomba, attempting to break open an ATM, and led police on a three-hour ...
Aussie tennis aces eye Wimbledon quarters - Taking nothing for granted but feeling supreme, Nick Kyrgios says it's too soon to look ahead to a must-watch all-Australian Wimbledon quarter-final w ...
Ash Barty among NAIDOC award winners - Retired tennis player Ash Barty has been named person of the year at the 2022 NAIDOC Awards.
Kyrgios beats Tsitsipas at Wimbledon - Nick Kyrgios's Wimbledon prospects have soared after the enigmatic talent overcame an injury scare and an all-too-familiar running battle with officia ... Natalie Imbruglia has announced her forthcoming new album, Firebird, set for release on September 24 via BMG. Alongside the announcement, Natalie has shared the first single taken from the album, the instantly catchy ‘Build It Better’, accompanied by the single’s official video (out tonight here) bringing a touch of La La Land to Nell’s Cafe. 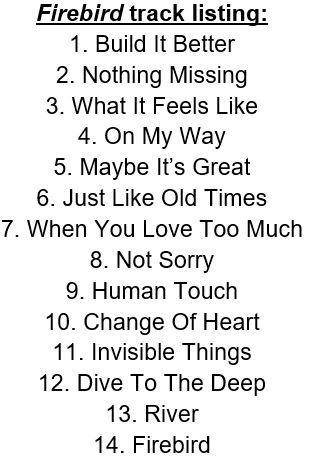 In contrast, the album was almost entirely recorded in lockdown, produced remotely by Natalie and My Riot with additional production from Albert Hammond Jr, Gus Oberg (The Strokes, Albert Hammond Jnr) and Romeo Stodart (Magic Numbers).

“Making this album has been such a profound and satisfying experience. Having gone through a long period of what essentially was writer’s block, it was sometimes hard to envisage getting to this place. Before the pandemic, I started the process of writing this album in London and soon after, I headed to Nashville. With each session and new collaborator, I started to gain confidence, find my voice again, and craft the sound and style that felt authentic to me. It’s been such a privilege to work with such an array of talent on Firebird. I just can’t wait for people to finally hear it.”

New single ‘Build It Better’ is the first to be lifted from the forthcoming Firebird. Though unintentional, it could be about a world recovering from a pandemic.

Natalie describes the single as “surrendering to the chaos and seeing what’s on the other side of it is a good life lesson. Letting something fall apart, and being okay with that, is something that I have had to do in my life, numerous times, but especially moving into this record and becoming a mum. So, I’m really excited about that song, and about the video, which is total escapist fun - the world needs that right now.”

Listen to the new track "Build it Better" Here:

Natalie Imbruglia was propelled into the limelight in the nineties, kicking off her career in music with the chart-topping ‘Torn’, reaching #2 on the UK Singles Chart, #1 airplay around the world and #1 on the Billboard Airplay chart for 14 weeks, with more than a million copies sold in the UK alone. The single was taken from her subsequent 1997 album Left Of The Middle which went on to sell over 7 million copies worldwide. Natalie went on to release studio albums White Lilies Island in 2001, Counting Down The Days in 2005 which charted at #1 in the UK Albums Charts, and Come To Life in 2009, before releasing an album of covers entitled Male in 2014. Natalie has accumulated sales of over 10 million albums and 1 billion streams, 5 x UK Top 10 singles, 10 x UK Top 40 singles, 1 x UK #1 album, 3 x UK Top 10 albums, 2 x BRIT Awards, 8 x ARIA Awards, 3 x MTV Music Awards, 1 Billboard Music Award, 3 x Grammy Award nominations and more.